The Heart, The Time, The Pen

by Crow vs Lion 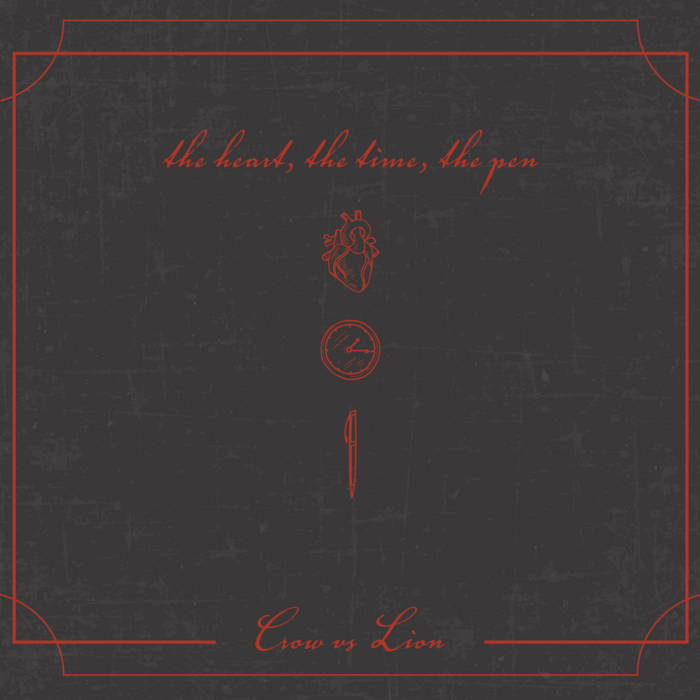 The album separates the themes of its title into three sections. Each section has four songs relating to The Heart, The Time, The Pen. The last song, the title track, embodies all three themes. So in total 13 songs. Although intentionally constructed to go deeper into the writer’s psyche as the album progresses from beginning to end, this can also be listened to with the sections played in random order, still ending with the title track. The idea is to create a different effect with each configuration. Also, you will hear three transitions, that are placed before the first song of each section that serve as indicators you are entering a new theme (The Heart, The Time, The Pen). The samples within these transitions were thoughtfully selected and contain deeper meanings to the three themes respectively.
The artwork for the album heavily supports the album concept. In it you will find Danny & Dylan’s Guide to the album, 13 veiled correlations in the artwork with the number 13, pictures that hold meaning to the concept, use of his son’s favorite color...red, and a Listener’s Guide to the album. Along with several other deliberate details.

When the album is downloaded there will be digital bonus items you receive/have access to: A Listener's Guide containing the hidden 13 correlations to the number 13 and other deliberate veiled details included in the songs and artwork, the Album Jacket, the Album Insert, & the Disc Art.

Recorded, Mixed & Engineered by Raphael Cutrufello at HarmilHome in Broomall, Pa.
Except * were recorded at mentioned locations.

All other Photos belong to the Gallagher/Olsen Family

Track #1: Transition into the Heart: sampled a demo TH1RT3EN by Crow vs Lion

Track #5: Transition into Time: sampled I Love My Family & Dean Helm by Hezekiah Jones from the album Have You Seen Our New Fort? (www.hezekiahjones.com)

Track #9: Transition into the Pen: sampled Lift the Shadow From This Heart & Traffic to the Sea by Hezekiah Jones from the album Have You Seen Our New Fort? (www.hezekiahjones.com)

Veiled symbolic poetic imagery, uniquely crafted arrangements, strategic use of metaphor with interconnected wordplay & a meticulous commitment to the overarching vision & concept is the ethos connecting Crow vs Lion’s body of work, a cauldron of experience & observation thoughtfully expressed.
Crow vs Lion is the music & art project of Dan Gallagher of Bucks County, Pa. ... more

Bandcamp Daily  your guide to the world of Bandcamp

Featuring appearances from Kari Faux, Bluestaeb and and interview with NY-bred artist Wiki